Atlantic Broadband is no more. The cable operator announced Monday that it has rebranded as Breezeline in the wake of recent deals that extended its reach beyond its traditional east coast footprint.

Breezeline, which will continue on as a subsidiary of Canada-based Cogeco, announced the branding change about four months after it wrapped the acquisitions of WideOpenWest's Cleveland and Columbus, Ohio, systems, which pass about 688,000 homes and businesses. Those systems, currently operating under the WOW brand, will transition to Breezeline by summer 2022. 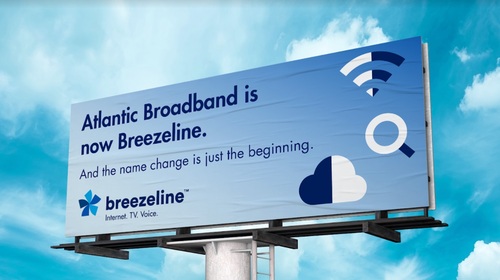 Click here for a larger version of this image.
(Source: Breezeline)

"We're no longer just an east coast provider, and we've long offered much more than broadband, so our company identity must evolve with us," Frank van der Post, Breezeline's president, said in a statement.

Breezeline joins several other cable operators that have pushed ahead with company or service rebrands. Other examples include Cable One (Sparklight), Comcast (Xfinity) and Charter Communications (Spectrum).

Tied to the rebranding, the company said it will launch a new cloud-based video service, called Breezeline Stream TV, in select markets in early 2022 and other markets later in the year. The company did not reveal vendor partner details, but TiVo has been a longtime partner. TiVo, meanwhile, has been getting more aggressive with app- and streaming-based offerings for pay-TV partners after acquiring the assets of MobiTV last year.

The name change also follows the launch of new customer care initiatives, including enhanced service options and simplified pricing. Breezeline said it plans to launch a new customer app in the early part of the year.

The company did not announce any new broadband initiatives in concert with the branding change. But Breezeline estimates that 97% of its customers already have access to gigabit services.

In November, the company announced it would spend about $82 million to expand fiber-to-the-premises (FTTP) networks to nearly 70,000 additional homes and businesses in parts of New Hampshire and West Virginia. Depending on the market, those moves that will pit Breezeline against incumbent providers such as Comcast, Consolidated Communications and Frontier Communications.